Here is the review of the newest Forex robot on BestRobotForex – ForexTruck EA. It has all the potential to get the title of a reliable trading robot. The hard risk-control and two-blocks trading strategy implemented in it is quite interested to analyze. So, in this review, we’ll get through all the pros and cons of this robot to figure out.

Live Statistics of ForexTruck with the Real Money Results

Here is a graph that shows the trading statistics of the Forex Truck robot and how exactly it has been trading. By clicking on the graph, you can view a more detailed statistic. As we can see the EA has one real money account and all the results have been verified by the independent company Myfxbook. From the first glance, the system shows constant growth of the account and almost no downward movement which pleases makes me expect this system to be a nice one.

Together with the live statistics on the Myfxbook official page, we can also see two backtests provided by the developer. As we can see these are two backtests with the different trading styles – Aggressive and Normal, which we’ll talk later in the review.
All the backtests were made on the basic Myfxbook backtester on the 1H timeframe with 90% accuracy which is okay for this EA because it does not use scalping strategy and doesn’t need the precise every tick data for its proper work. All the backtests were made on the 6 years quotes data from 2014 to 2020 which is a totally fine backtesting period for the proper assessment.

Live statistics of the Forex Truck EA starts 9 months ago in January 2020 with the initial deposit of $2000. The EA managed to grow the deposit amount by %230.56 during its work on the market which is not a bad result for the Forex robot that has got a bit over 23% of drawdown level. Yet, it is not the highest profitable Forex robot that I’ve been doing a review on but still the results are high enough.

At the same time, the average monthly account growth of the Forex Truck EA is a bit lower than 15% according to the Myfxbook live trading statistics. It is a good result for the Forex robot that hasn’t had deep fixed drawdowns for more than 9 months of trading.
If talking about the drawdown level of the EA we see that the Myfxbook company have fixed the higher floating drawdown of this EA on the level of 23.08% but if we turn our attention to the “Drawdown” chart on the same Myfxbook page we can clearly see the highest fixed drawdown level, which is only 9.77% (look at the screenshot below).

It means that the EA managed to trade very safe during the last 9 months period and still manage to gain more than 200% of profit, which shows us the reliability of the system on the high level.
Taking into account the gain level metric, the trading period, and the drawdown level of the Forex Truck EA it is needed to say that the profit/drawdown ratio in the case of this robot is quite impressive. It is close to the 1:1 ratio and I usually prefer to call the Forex robots with such a ratio high-profitable automated trading system.

The Forex Truck works 100% automatically. The strategy and algorithms used in this Forex robot made it possible to be compatible with any broker, so there is no need to select a broker with special trading conditions, which is good for the traders that are quite new to Forex robot trading.
The Forex Truck EA is made in such a way that it can work with two platforms at the same time: MetaTrader 4 and MetaTrader 5. So, when you buy the license of Forex Truck EA, there are both versions of the EA in the package without any additional payments.
Talking about logic and the principle of trading put into the Forex Truck EA the developer explains it this way:

“Our Expert Advisor has a special feature – it consists of two blocks that work together.” 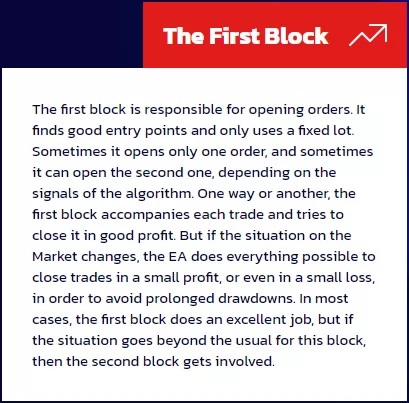 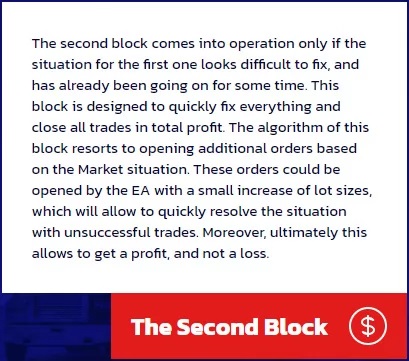 So, basically, what we see is that the system actually uses two trading systems according to the situation on the Market. It is an interesting unusual approach to developing a trading robot. If analyzing the trading activity of the Forex Truck EA we can see that sometimes the system uses some kind of Martingale grid system to recover the losing trades but it is hard to determine the specific step of lot increase (look at the screenshot below). The logic behind this is unclear but as we can see the system works pretty well since the EA has managed to be profitable and to not meet deep fixed drawdowns so far. 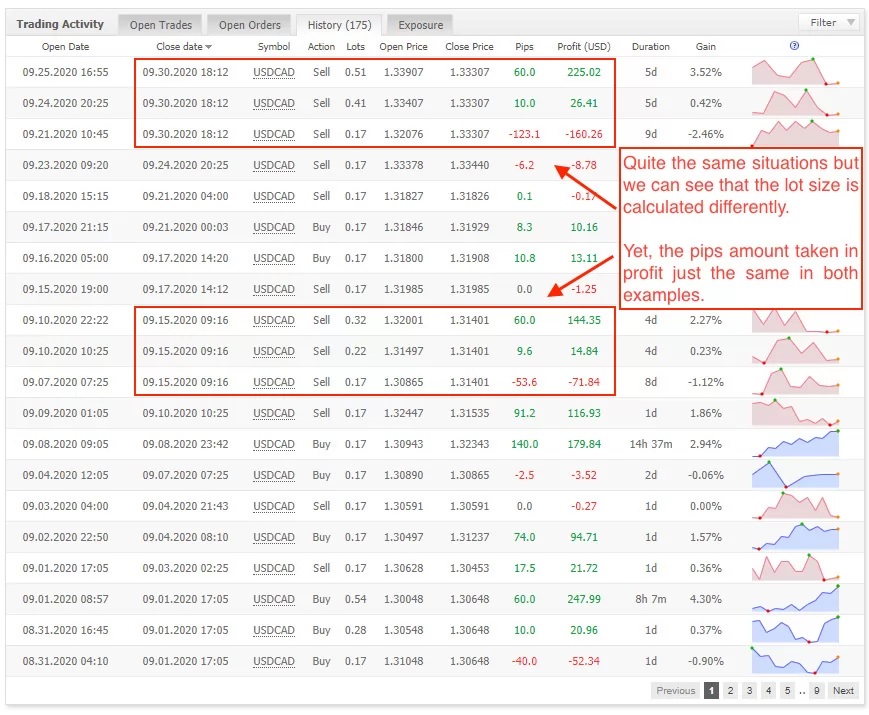 There is also a risk control system implemented into the Forex Truck EA which is programmed to help traders to manage drawdowns limiting and to ensure the safety of the funds of the trader. It uses both StopLoss and forced closing of the positions depending on the situation on the Market. To do so the EA monitors the status of the order in real-time. But the system does not choose what is the amount of the account to risk. It’s the trader who chooses it, specifying the “risk” value in settings, which helps to risk exactly as the traders expect to lose in the worst situation.
The EA also uses the compound interest to grow the deposit in accordance with the gain level on the account which is clear when we compare the trading chart from the beginning of the Forex Truck EA trading and the latest trading activity chart (look at the screenshots below).
Here is the trading activity of the Forex Truck in January 2020. The Lot size here is 0.10.

And here is the trading activity of the EA in September 2020. The lot size now increased to 0.17.

The approximate average durations of the open trades on the Market on the Forex Truck EA account varies from less than 1 hour to 5-9 days. At the same time, the orders that have been opened for longer than 5 days in most of the cases ended up being unprofitable as we can see from the tab below.

Shortly characterizing the Forex Truck EA after the review of the main features of this robot, I can admit that this EA looks pretty promising. The results that we already see for 9 months of the trading show that it can be reliable and profitable at the same time.
The system has all the possibilities to show good results in the future. The backtests of the EA pretty impressive as well as the profit/drawdown ratio. There is also very interesting trading logic put into this Forex robot, using a two-blocks system and risk control system to minimize the drawdowns and losses.

ForexTruck Robot is designed in such a way, so that you can get the same results as on our account. If for some reason the trading on your account is different or you get a loss of more than 35%, then developer will refund your money!